The City of Bell Gardens has a rich history dating back to the late 1700’s when the area was associated with a large amount of land situated along the lower basin of the Rio Hondo area in Los Angeles County. Bell Gardens was once a bustling agricultural center for immigrants escaping the Mexican government. Among them was one of California’s first families, the Lugos.

In 1771 Antonio Lugo was a 35-year-old corporal in the Spanish army and was given a land grant of more than 29,514 acres, which today is known as the cities of Bell Gardens, Maywood, Vernon, Huntington Park, Walnut Park, Cudahy, South Gate, Lynwood and Commerce. The land grant was given as reward for his military service during the establishment of the Franciscan Missions in California while being the attendant of colonization for the area.

While stationed at San Antonio de Padua Mission near Salinas, California, Antonio Lugo’s son Don Antonio Maria Lugo was born in 1783. Later as a young man, Don Antonio, using this large amount of undeveloped territory given to his father, Lugo built one of the largest ranches in the history of the state of California. Don Antonio then built an adobe home on the ranch, which he named Rancho San Antonio. There, Lugo raised cattle and became one of the most respected members of the community, so much that he was given a term as Mayor of Los Angeles. He built several adobe homes within the boundaries of the grant. One of the adobe houses, built about 1810, is the oldest house in Los Angeles County and is still standing at 7000 Gage Ave.

By the time Don Antonio was in his sixties, he had amassed thousands of acres of property. Although he sold some of the land, the majority of it was lost when California became a part of the union in 1850.

Yankees, who wanted Don Antonio’s valuable land and the property of dozens of other Spanish land grantees, relied on politicians to pass decrees that eventually stole not only the land, but also the livelihoods of California’s founding families.

One of his nine children, Vicente, married and built a two-story adobe home in 1850, located at 6360 Gage Ave. A daughter of Don Antonio Maria married Stephan C. Foster, Mayor of Los Angeles in 1854 and lived in an adobe house just east of 6820 Foster Bridge Road, now marked by a parking lot. A granddaughter of Antonio Maria Lugo married Wallace Woodworth, an early-day merchant and civic leader in Los Angeles. Their eldest son, Joseph, built a two-story colonial style house at 6820 Foster Bridge Road in 1924.

Some of the last remaining Lugo property, a 27-acre parcel was transferred to Henry T. Gage, a lawyer who married one of Don Antonio’s great granddaughters. The acreage was given to Gage as a part of his marriage dowry to Frances V. Rains. When Gage acquired the mansion he worked very extensively to restore the heritage farmhouse of early Los Angeles. The Gage mansion is a witness to the history of Los Angeles and its magnificent early architectural designs.

One of Bell Gardens most well known citizens was Henry Tifft Gage who served as California’s 29th Governor from 1898-1903. He married Isaac Williams’ daughter, Francesca V. Rains in 1880 and became owner and occupant of the Lugo Mansion, now known as the Gage Mansion at 7000 Gage Ave.

The land’s original adobe dwelling was built in 1795 and named Casa de Rancho San Antonio by Lugo. When Gage occupied the residence, he added two wings and redwood siding, installed bronze fireplaces, and imported expensive fabric wallpaper from France to serve as background for the Gage coat of arms, which enjoys a place of prominence in every room.

Because of the rich soil and abundant land, many Japanese immigrants are part of Bell Gardens’ early history. Japanese Gardeners leased land and farmed to produce quality vegetables for the marketplace. Rice fields also mushroomed within the city limits of Bell Gardens. With some of the richest agricultural land in the country, Bell Gardens remained a farming community until the 1930’s. 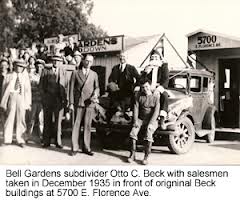 In 1927 Firestone Tire Company bought some of the land at $7,000 an acre. By 1900, Bell Gardens was divided into tracts of 40 to 100 acres. The land adjoining the city of Bell became known as Bell Gardens. In 1930, O.C. Beck purchased property and begins to build affordable homes for those suffering through the depression era.

World War I and World War II brought defense plants to the area that helped build the economic stability and the population, which led to construction of new homes, more schools, and a prosperous business climate.

Bell Gardens is a relatively young city. Since its incorporation on August 1, 1961, Bell Gardens has grown from a population of approximately 4,000 to nearly 45,000. The median age is 23.8. There are six elementary schools, two intermediate schools, one high school and two adult schools. It is 93.4 percent Hispanic, 4.7% White, 0.6 % Asian, 1.7% American Indian and Alaska Native and 1.1 % African American.

Today, only a 2.4 square mile city, Bell Gardens maintains only a small portion of the original Lugo land grant, which is located at the site of the Casa Mobile home Park at 7000 Gage Ave. In 1991 the park’s tenants, who own the land as well as Lugo’s original dwelling, were successful in their efforts to have Casa de San Antonio named State Historical Monument No. 984. Their effort ensures that Don Antonio Maria Lugo’s name and his historic home will be preserved for future generations of Bell Gardens residents and Californians.